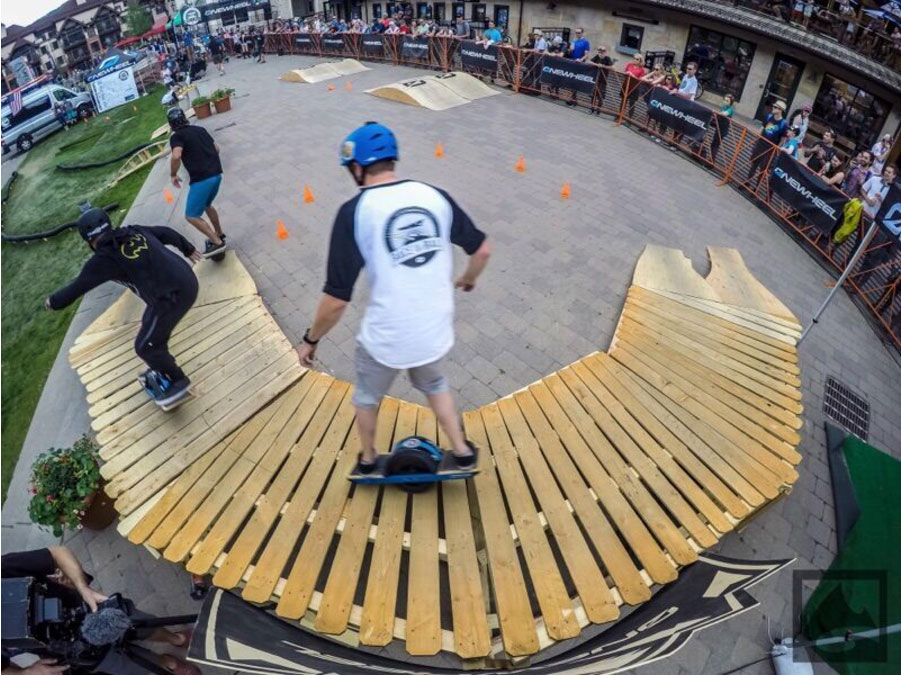 Hoverboards were all the rage last year. Then, they quite literally imploded. Segways? Let’s face it … they’re kind of for lazy people. Onewheels, on the other hand, look like they’ve got serious staying power.

Resembling a skateboard with one giant wheel in the center (the only moving part), Onewheels are powered by unique brushless hub motors and are designed to be taken anywhere – on roads, beaches, singletracks or ramps. Although the boards look challenging to balance on, they are built with self-balancing sensors that keep the board where it needs to be around the wheel. It goes forward when its rider leans forward, stops when you lean back and turns when you press down your heels or toes.

Making its second appearance at the GoPro Mountain Games, Onewheel went all-out this year with an obstacle course in Lionshead, which has been a hub all weekend for curious first-timers ranging from seven-year-olds to middle-aged moms and dads and teenagers who are instant pros, launching over ramps and riding down stairs. A Onewheel race on Saturday saw several of the Mountain Games’ top paddle athletes weaving swiftly through the course with the ease of floating and the SUP crowd have been spotted carting their boards through the village throughout the weekend on Onewheel transportation. Onewheel representatives say that the product, which launched in 2014 thanks to a successful Kickstarter campaign, is a hot item among the stand-up paddleboard crowd,  because it enables them to “get their stoke” while they are away from water.

“For people who get it, they really get it,” says Onewheel’s Blake Crow, who has been constantly accosted throughout the weekend by curious passerbys interested in trying and learning more about Onewheel. “The learning curve is similar to snowboarding, a lot of people take to it right away.”

Save for the yet-to-be-invented flying Hoverboard modeled after the Back to the Future variety, there’s no question – at least not among the Mountain Games crowd – that Onewheel is the sweetest board out there.

Learn more about it at onewheel.com.