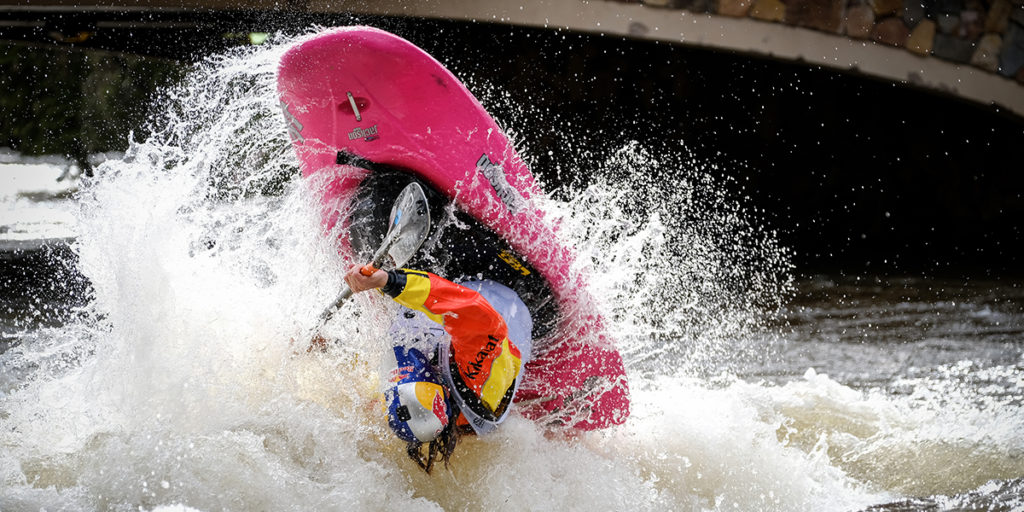 At the ripe old age of 24, there’s very little that Dane Jackson hasn’t done in a kayak. Whether it’s dropping massive waterfalls, winning multiple ICF Freestyle World Championships or doubling down with gold medal performances in the Coors Light Steep Creek Championships and Freestyle Championships at the 2017 GoPro Mountain Games, the reigning king of kayaking can pretty much do whatever he wants, whenever he wants, with a boat and a paddle.

When you’re used to kayaking every day, winters can be vexing. Most of North America is locked up in snow and ice, and sunny spots like Florida are too flat to offer any genuine whitewater. So leave it to the world’s most driven whitewater kayaker to create his own.

You may or may not yet be among the estimated 50 million viewers to see the viral video where Jackson has his way with the wake from a pair of waterski boats cruising side-by-side on a lake in Florida last month. But it’s worthy of watching.

In the clip captured via GoPro, Jackson demonstrates his Jedi playboating skills after being scooped up in the froth between the two boats and carried for a few hundred yards across the lake. He throws Air Screws, Phonics Monkeys and a host of other high-scoring freestyle tricks between front surfs, back surfs, side surfs and back stabs as if he was throwing down in the contest hole on Gore Creek at the GoPro Mountain Games.

We caught up with Dane between waterfall drops on the White Salmon River and making plans for the “Unleashed” competition he’s organizing in Canada later this month to get the backstory on the video and his off-season paddling program. Here’s what he had to say:

“I was down in Florida for a quick little Red Bull summit at the end of February, and a couple of wakeboarders on the team and I have become good friends. I’ve been thinking about it for a couple years now and more than anything I just wanted to try it. I basically just wanted to see if I could make a decent wave for freestyle kayaking and it turned into a super sick afternoon. The wave in the video was so much better than I expected, but still not even as big as you could get it. The clips I posted were from my first one or two rides. It didn’t take long for us to dial in how to make the wave really good.”

“You can’t find a wave like that in most places unless the rivers are at flood stage, especially at that time of year. Maybe in eastern Canada or a few places overseas, but everything is pretty much frozen. And there we are in Florida, able to make a sick wave.”

“I was pretty much able to do whatever I wanted. Every wave trick I could think of, you could do. The boats were moving faster than I thought you could go and still get a good ride, surprisingly really good. And then the video just demolished  the web.”

“It’s hard to get your fix in the offseason, so it’s cool to know that if I get behind two wake boats I can get my playboating fix anytime I want. I’d like to take it farther. Yeah, it’s an unnatural wave, but most of the time a kayak video goes viral it’s footage of someone paddling in a drainage ditch or something. It’s not really kayaking. This is still essentially freestyle kayaking, and it’s really hard to get a viral freestyle kayaking clip because so few people understand it. But this one was shared over half a million times, and I think the viewership is close to 50 million so far. So I’m stoked.”