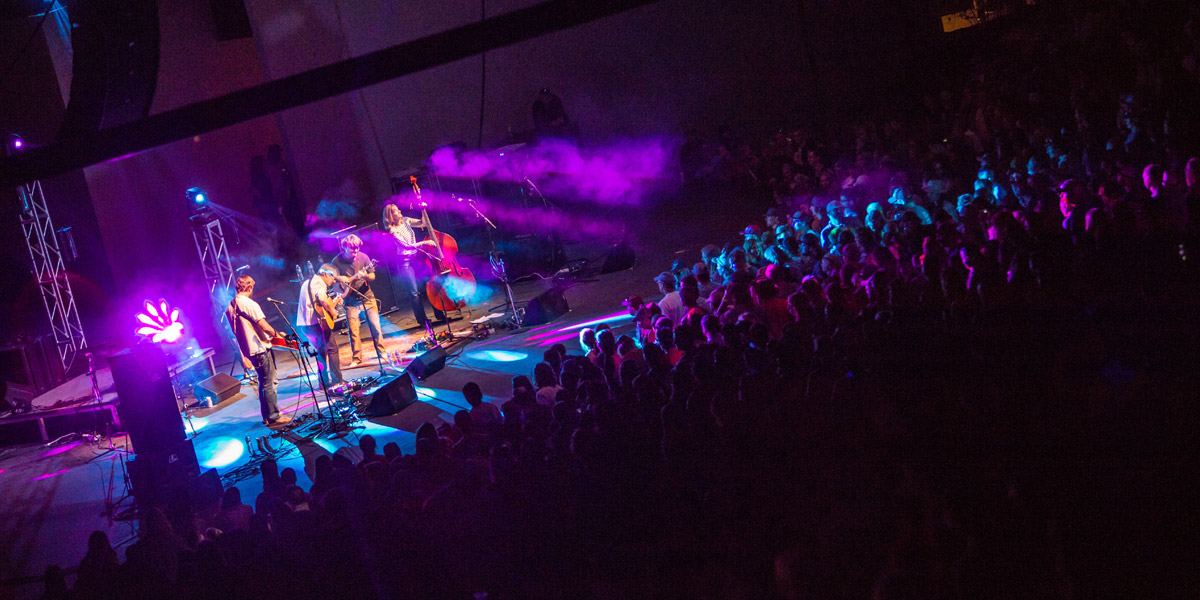 If there’s one, single, music act capable of summing up the cultural blend of lifestyle and adventure at the GoPro Mountain Games, it might just be the Playing For Change Band. Originally conceived in 2002 as a shared vision between co-founders Mark Johnson and Whitney Kroenke, Playing For Change travels the world filming and recording musicians performing in their natural environments and combines these performaces in powerful videos known as Songs Around The World. These videos have seen hundreds of millions of views on YouTube and one was recently featured during the Opening Ceremony of the 2018 Winter Olympic Games. The 10-piece band, formed in 2008, combines a rotating cast of musicians from around the world who travel the globe and serve as a tangible representation of the organization’s mission to connect the world through music.

The Playing For Change Band’s blend of various musicians is an ideal fit for the outdoor stage at the Gerald R. Ford Amphitheater, where a varied mix of mountain sports come together for the annual showcase of adventure sports, music, and lifestyle in Vail June 7-10.

Meanwhile, the remainder of the extensive music lineup adds even more to the sound spectrum in a style worthy of the multidimensional Mountain Games.

Take the Chris Robinson Brotherhood, for one. Led by the founding frontman of The Black Crowes, the California collective blends a jam of rock, blues, country, funk and soul spiced with a dose of psychedelia that mixes easy with the Mountain Games vibe.

“We’re a pretty versatile band and can blend into many different scenarios depending on the set list we write, so I think it will all flow really naturally,” lead guitarist Neal Casal said. “We bring that outside energy wherever we go. I think that’s why Colorado and the CRB go so well together. It’s a perfect merging of Western non-conformist people and like-minded artists.”

Like so many Mountain Games returnees, the Rocky Mountains offer something of a homecoming for Casal and the CRB, who arrive ready to open the first of three free shows at The Amp on Thursday night, June 7.

“Colorado was the first place outside of California that really embraced the CRB and we’ve been coming back ever since,” Casal said. “There is such an amazing music scene throughout the entire state, it’s kinda mind blowing and a true example for the rest of the country on how to support bands and live music in general. We’re very fortunate to be a part of the scene there and plan on coming back for as long as we possibly can.” Playing For Change enters the scene Friday night for its first of two shows, opening for St. Paul and the Broken Bones and bringing its message of unity through a celebration of diversity. With musicians from the Congo, Israel, Colombia, Venezuela and beyond, PFC has collaborated with the likes of Keith Richards, Robert Plant, The Doobie Brothers, Ziggy Marley, and Toots & the Maytals, and have performed over 300 shows including headlining for an audience of 35,000 in Brazil.

And yet, PFC’s Johnson may be even more excited to perform in Vail.

“I’m excited beyond belief, just because of the festival and the bands that will be performing,” Johnson said. “It’s going to be amazing, and in one of my favorite places in the world. We’ve always fit in great in Colorado. Of all of the places we’ve been to in America, Colorado has the biggest music lovers I’ve ever seen, probably because of the outdoor lifestyle. People are just more in tune with their surroundings.”

That tune plays in harmony with PFC’s greater mission of uniting the world through music. To that end, the group has formed a nonprofit organization dedicated to building music and art schools for children around the world, with the ultimate goal of creating hope and inspiration for the future of our planet.

Johnson, who drew much of his inspiration for PFC from a stint working with the legendary Paul Simon, is convinced the energy of the Mountain Games and Vail will carry the group to new heights.

“It’s one of the more open-minded and joyful places I’ve ever played, but any time you get around a festival like that, all that energy matches with the energy of the band and they create something completely new,” he said. “That’s why it’s always so great to play festivals. It’s the best way to connect with a lot of people at once and create a new world.”

Visitors to the Mountain Games can expect the musical journey around that world to continue throughout the weekend, with highlights from St. Paul & the Broken Bones and a Saturday night finale featuring Boulder-born electric blues-funk-folk artists The Wood Brothers, and a set from the rhythmic Vail locals Bonfire Dub Saturday, before PFC, will complete the lineup.